The painter of wolves and snow Alfred von Wierusz-Kowalski was born on October 16, 1849 in Suwalken, Poland. He is considered one of the main exponents of nineteenth-century Polish painting.

His motives are captivating, luminous and spirited. His style is realistic and rich in detail, sometimes shocking and cruel. His main topics include: folk life in Poland, wolves, snow, hunting scenes, horse teams and sleigh rides. The wolves became his favorite motifs and have a strong recognition value in his oeuvre.

The connection with wolves arose in the childhood of the painter. Alfred von Wierusz-Kowalski was on a sleigh ride with his family when they were attacked by wolves. Luckily, they were able to escape. But this experience left a lasting mark on the artist. But many other motifs are inspired by Wierusz-Kowalski's childhood. For example, when the family moved to Kalisch (in the center of Poland) and drove across the country, the artist was fascinated by the winter landscapes and people on this journey.

The Pole was a masterpiece of snowy landscapes. Light reflections and special Techniques such as coarse, bright colors, impasto jobs, and tonal contrasts showed how bravado he could capture the texture of snow. The figures he formed dynamically, either full of energy and strength or moody and muted.

The small town of Kalisz, in which he grew up, lay between lakes and forests. The rural life was rather poor and poor. Nevertheless, in this milieu the talent showed itself and the little Wierusz-Kowalski was sensitized to art.

In Kalisz he studied at a high school and showed a special inclination to subjects like drawing and calligraphy. In 1868, Alfred von Wierusz-Kowalski moved to Warsaw, where he attended the drawing class. He also entered the studio of the gifted painter Wojciech Gerson. In 1869 Wierusz-Kowalski went to the Academy of Fine Arts in Dresden. There he got access to the most important works in the world by Rubens, Rembrandt and Dürer. He admired the works of the masters and was deeply inspired.

In 1872 Wierusz-Kowalski moved with his fellow artist Vaclav Brožik to Prague, where he worked as a freelance artist. The following year, 1873, the two men decided to move to Munich. Alfred von Wierusz-Kowalski enrolled at the Munich Academy of Fine Arts as a pupil of the Hungarian painter Alexander von Wagner. In Munich, where he later founded his own studio, Wierusz-Kowalski settled down for a long time.

Powrót kwestarza" (" The Return of the Gathering Collector ") to the Vienna Art Exhibition.

The masterpiece" Raiding Wolves "- 10 m wide and 5 m high and today a famous monumental work - was already used by Wierusz during his lifetime. Kowalskis in the old city hall in Munich made accessible. It receives a great response from the press and even from members of the Regent family.

Alfred von Wierusz-Kowalski attended many exhibitions in Munich, Poland, Paris, Vienna, Berlin, Brussels, Prague and the United States involved. In 1892 his painting " Wilki. W lutym na litwie " (" In February ") honored. But over time, he felt the declining interest in his work. In search of artistic inspiration, he undertook a trip to North Africa in 1903. His style got a whole new impetus. So many Arabic-exotic scenes have emerged with Bedouin and mosques.

But the feeling of fading glory did not leave him. In addition there were financial difficulties, the illness of his wife Jadwiga and her own artistic crisis. Alfred von Wierusz-Kowalski died on 15 February 1915 at the age of 65 in Munich. His pictures were sold in 1917 at auction. The rest of the artistic heritage was brought to Poland. 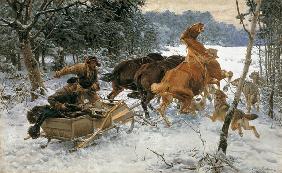 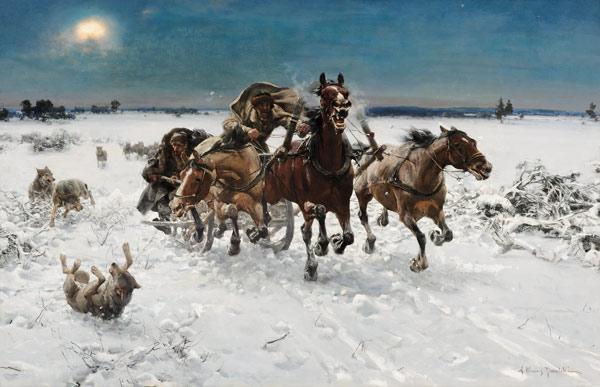 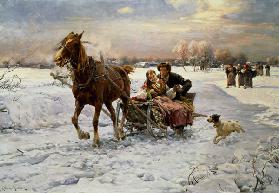 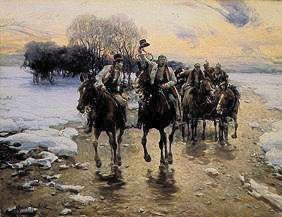 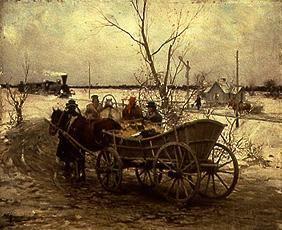 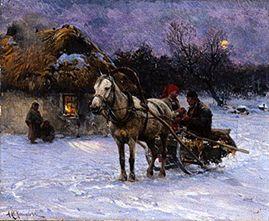 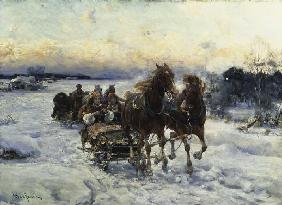 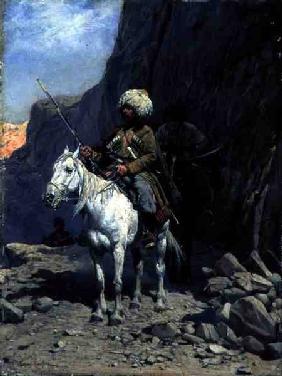 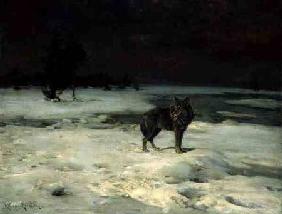 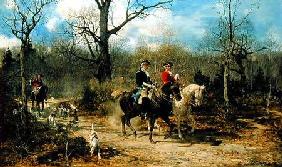 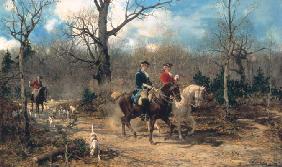 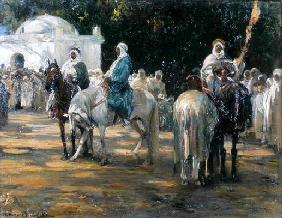